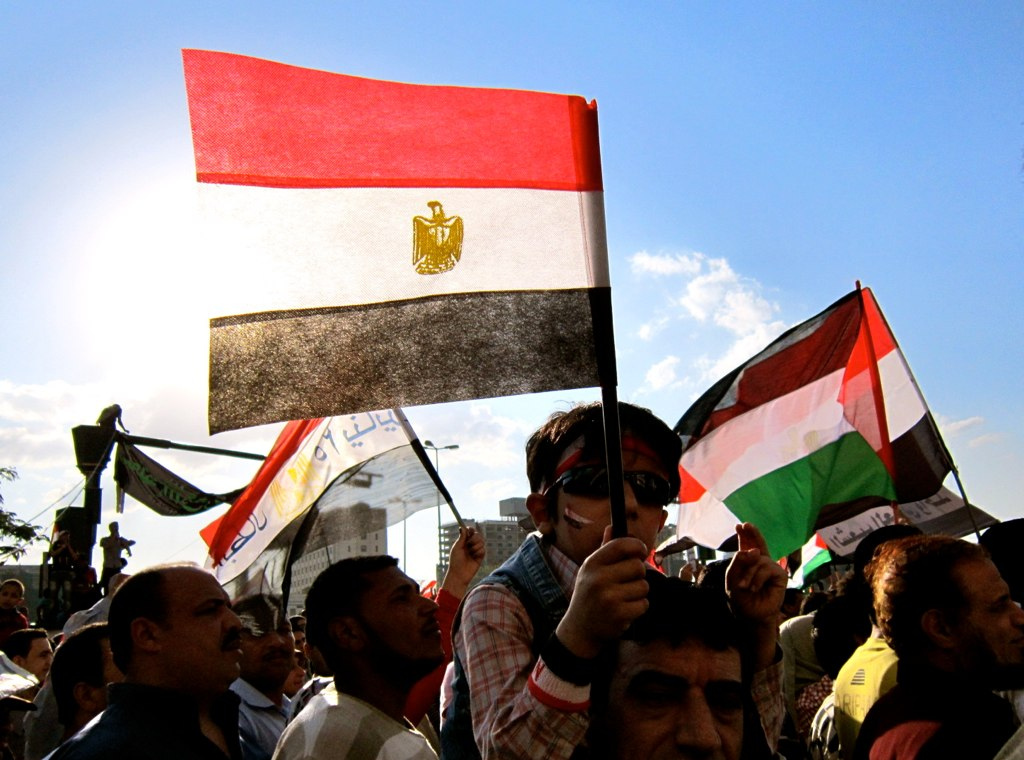 The Enemy of My Enemy: How the Revolution Died in Egypt

It was Christopher Hitchens who in 2011 said that Egypt is not so much a country with an army, as it is an army with a country.[1] Had Hitchens lived to see today, he would have witnessed his worry of Egypt’s Revolution being “partially aborted”[2] materialize instead along the lines of infanticide. Hardly one year after the inauguration of the Revolution’s first elected president, the Egyptian military, led by General Sisi, ousted the Islamist President Mohamed Morsi and suspended the constitution.[3] Now, amid strained and bloody unrest in the wake of a coup d’état, the military regime has set its sights on Morsi’s ideological cronies, the Muslim Brotherhood.

One wonders whom, if anyone, to villainize. To be sure, the military toppling of a duly elected leader, followed by suppression of the remnant opposition, does not look like democracy. However, Morsi’s attempt to exalt himself above the constitution[4] also did not help the credibility of an organization that touts, “Qur’an is our law. Jihad is our way.”[5] And this is to say nothing of the violence meted out like clockwork from both sides. Whether it is the process or the substance of democracy at stake, one can say at least that the Revolution’s spirit has been sufficiently neutered.

To Coup or Not to Coup?

There is something vaguely Orwellian in U.S. Secretary of State John Kerry’s assessment that the Egyptian military “did not take over, to the best of our judgment—so far.”[6] And, in true Orwellian fashion, the effects of doublespeak are not confined to a bubble of semantics.

The Obama Administration has done the bare minimum of cutting, if only slightly, U.S. aid to Egypt’s military, depriving an increasingly brutish regime of some of its favorite toys (like F-16’s and Apache helicopters).[7] What the Administration has not done, still, is to call the coup a coup, gingerly eluding the U.S. law[8] that withholds all funds to governments usurped by military ambition. To the extent that this act of willful blindness permits the United States to further fund the Egyptian military, the Administration has lent the regime the livery of legitimacy.

It is tempting to defend the Administration’s deliberate ignorance as a tacit endorsement of a problematic, yet justified, military endeavor. According to this narrative, democracy is not built in a day; to make a democratic omelette, it’s necessary to break a couple eggs. Certainly Morsi’s presidency smelled rotten from the start. Among his chiefest sins in the eyes of his detractors were his attempts to exempt his acts from judicial scrutiny[9] and to privilege Shari’a law over secular concerns.[10] Within months, critics had bequeathed to Morsi the contemptuous title of “Egypt’s new pharaoh.”[11] By the summer of his first year, mass protests called for Morsi’s removal; dutifully, the military obliged. The coup of 2013 was, in this light, not so much the negation as it was the extension of the long, protracted labor pangs of revolution. If it is true, as Ozan Varol has suggested, that a coup may be conducive to democracy,[12] then perhaps the Egyptian military is but the ward against a revolutionary hijacking by the Brotherhood.

A Coup of One’s Own

One wishes there were wisdom in John Kerry’s estimation, in July, that the Egyptian military is “restoring democracy.”[13] However, as the regime prolongs its honeymoon, that optimism looks troublingly indefensible.

First, there is the problem of opacity: the aptly titled Court of Urgent Affairs banned the activities and seized the assets of the Muslim Brotherhood, offering little legal basis.[14] Further, when the military regime convened a group to scrawl a surrogate constitution, the Brothers were conspicuously uninvited;[15] Brotherhood leaders had a previous engagement behind bars.[16] Added to these democratic blunders are the detention of Mohammed Morsi at an undisclosed location[17] and the release of ex-dictator Hosni Mubarak from prison.[18] This point cannot be overstated—this is the very same tyrant against whom the Revolution was waged. Thus, while General Sisi claims to act for the people, his record has erred thus far on the side of the ancien régime.

While opponents of the coup languish in detention, the military has stacked civilian bodies by the hundreds.[19] General Sisi’s reign has brought the reinstatement of emergency law[20] and the smothering of dissident media,[21] as well as the appointment of former generals to provincial governorships.[22] The result is a portrait of Egypt that looks oddly similar to what the Revolution railed against. One thinks of Chile’s Pinochet or Argentina’s Videla, who seized power in the face of an unpleasant Marxist threat, only to prove their respective regimes equally disagreeable (if not more).

Between a military Scylla and an Islamist Charybdis, we see the latter subverting within the law and the former perverting without. The United States has had no recourse but to insist, almost impotently, on a more “inclusive” democratic process. Perhaps it is the luxury of a stable Western state to tolerate contrarian elements. In Egypt, however, such a prospect seems bleak. One sees already in Egypt the ugly symptoms of extremism in the Islamist attacks on Coptic churches.[23] Thus, what we have is a democratic deadlock, where the enemy of one’s enemy is still the enemy, and both sides have forfeited the claim to act in the Revolution’s name.

Citation: Jordan Manalastas, The Enemy of My Enemy: How the Revolution Died in Egypt, 1 Cornell Int’l L.J. Online 50 (2013).

[4] See English Text of Morsi’s Constitutional Declaration, Ahram Online (Nov. 22, 2012), http://english.ahram.org.eg/News/58947.aspx (“Previous constitutional declarations, laws, and decrees made by the president . . . are final and binding and cannot be appealed by any way or to any entity. Nor shall they be suspended or canceled and all lawsuits related to them and brought before any judicial body against these decisions are annulled.”).

[5] Ramashray Upadhyay, ‘Muslim Brotherhood’ – An Ideological Protectorate of Saudi Arabia?, Ikhwan Web (Dec. 29, 2009), http://www.ikhwanweb.com/article.php?id=22363 (“Dedicated to the credo – ‘The Prophet is our leader. Qur’an is our law. Jihad is our way. Dying in the way of Allah is our highest hope,’ Muslim Brotherhood gradually emerged as one of the internationally known militant organizations.”).

[10] See  Edmund Blair, U.S.-Based Rights Group Says Draft Egypt Constitution Flawed, Reuters (Oct. 8, 2012), http://www.reuters.com/article/2012/10/08/us-egypt-constitution-idUSBRE8970RA20121008 (“[Human Rights Watch] said article 36 of the draft constitution threatened equality between men and women by saying the state should ensure equality as long as it did not conflict with ‘the rulings of Islamic Sharia.’”).

[19] See Egypt: ’50 Dead’ in Clashes Amid Rival Demonstrations, BBC News (Oct. 6, 2013), http://www.bbc.co.uk/news/world-middle-east-24421069 (“Hundreds of Islamist protesters have died in violence since the Egyptian military deposed Mr. Morsi in July, 13 months after he was elected as president.”).