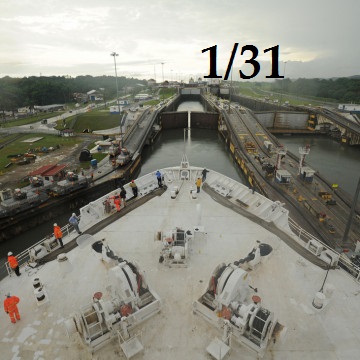 The sun rises in the east, the tides go in and out, and construction projects run over budget. Recent statistical analysis shows that this old bromide is often true,[1] and international examples abound: the Scottish Parliament building had an estimated cost of £40 million but an actual cost of £400 million;[2] the Chinese have been building an iron ore mine that is three years behind schedule and three times over budget;[3] and the construction project overruns for the 2014 World Cup have organizers worried that the host country will not be ready in time.[4]

After a project bid is accepted, cost overruns like these can lead to contractual disputes. In the international context, such disputes are often resolved through arbitration or mediation. However, this bid-dispute-arbitrate (or mediate) process can mask more sinister motives by contractors. In the case of the disputed Panama Canal expansion, this appears to be the case. This article explores how a European consortium of construction companies obtained the Panama Canal’s expansion contract and argues that the consortium likely low-balled the Panamanian authorities, leading to the current dispute over the additional costs.

II. History of the Panama Canal

A masterwork of large-scale engineering, the Panama Canal was built to facilitate travel from the Atlantic Ocean to the Pacific, saving approximately 13,000 miles and several months of travel time in a trip from New York City to San Francisco.[5] The French carried out the initial attempt to build the ambitious Canal.[6] This effort, however, ended with bankruptcy, a death toll of 20,000 workers, and only eleven of the fifty miles of the Canal excavated.[7]

After this initial failure, the United States stepped in to complete the Canal. The U.S. bought the necessary equipment and rights to the Canal from the French and, later, helped Panama obtain its independence from Colombia and institute the country’s new government.[8] Under the shadows of World War I, the Panama Canal was officially inaugurated in 1914 to a world community that was more preoccupied with the calamities of the war than the huge economic benefits of the Canal.[9]

In 2006, seven years after the Panamanian government gained exclusive control over the canal, Panamanians voted to expand the Canal to better meet current maritime needs.[10] High traffic through the Canal had created a chokepoint, significantly reducing the Canal’s economic benefits.[11] To allow larger ships to pass through and to lessen the wait, the planned expansion promised two new entrances—one on the Pacific side and one on the Atlantic side—and the creation of a new set of more efficient locks.[12]

Unfortunately, since GUPC won the bid, the project has faced substantial overruns in cost. In response, the GUPC has threatened to halt the expansion if the ACP does not pay an additional $1.6 billion in additional costs.[15] To resolve the dispute, GUPC sought mediation through the European Commission. However, earlier this month, the APC rejected that option.[16]

III. Did GUPC Low-ball the APC?

Depending on which venue the parties choose to resolve the dispute, an important question may be whether GUPC intentionally low-balled the APC. Here, the circumstances suggest GUPC did. As an initial matter, GUPC’s bid was over $1 billion less than Bechtel’s. While GUPC claims that its bid was lower because Bechtel’s design included gates that were 50% larger, [17] the sheer magnitude of the spread between bids is nonetheless persuasive.

In addition to the magnitude of the spread, the financial condition of GUPC’s lead company at the time of bidding also supports the low-ball theory. Sacyr, the leading company in the GUPC consortium, was previously one of the engines behind Spain’s construction bubble. However, the housing market crash of 2008 stalled Sacyr’s ascent and almost pushed the company into insolvency.[18] At the end of 2008, the company had €14.5 billion in debt, about seven times its market value.[19] Looking for business to keep itself afloat, GUPC had a strong motivation for securing the Canal contract in June of 2009.

Rejecting the low-ball accusation, GUPC argues that the cost overruns are attributable to events outside of its control. In particular, GUPC blames the ACP for providing a study that failed to detect the presence of fault lines that diminished the quality of basalt earmarked for the mixing of cement. [20] The presence of these fault lines, according to GUPC, has significantly increased costs. However, even if that is true, GUPC’s contract—as the APC has pointed out—gives no assurances on the quality of the rock in the area.[21] With this in mind, GUPC should have incorporated the potential cost of the basalt into its original bid.

More generally, GUPC argues that cost overruns are common due to the complexity and longevity of a project such as the Canal’s expansion and that it would be absurd to think that the project would come in on budget.[22] In this regard, GUPC appears to be at least partly right. According to a study of construction costs, approximately 85% of all projects incur overruns.[23] However, as the study further notes, the average cost of overruns hovers around 28%,[24] nowhere near the 50% jump incurred by GUPC. Thus, while GUPC can argue with some force that the custom in the construction industry is to incur overruns, the magnitude of its additional costs are clearly outside the norm.

IV. Should the APC Have Seen It Coming?

Another important inquiry may be whether the APC was sufficiently diligent in accepting GUPC’s bid. GUPC may argue that the APC knew it was a low-ball bid but accepted it anyway. Indeed, as Panama’s Vice President Carlos Varela said in 2009, “[w]hen one of the bidders makes a bid that is a billion dollars below the next competitor, then something is seriously wrong.”[25] If GUPC can demonstrate the APC’s complicity in the arrangement, this could put GUPC in a more advantageous position.

One way of approaching this issue is to look at bidding strategy. Generally, a buyer’s bidding strategy involves getting three different bids that are categorized as low-ball, value, and punt.[26] The punt is automatically disregarded because it is the highest bid.[27] The low-ball is usually disregarded in favor of a value bid because low-balls are viewed suspiciously and are often placed with the intent of later raising the price through add-ons.[28] Under this framework, perhaps the APC should have been more skeptical of GUPC’s bid, especially considering it was $1 billion lower than Bechtel’s.

What happens next? Since the parties have not yet begun formal litigation, the outcome of the conflict is still in their hands. Under the circumstances, GUPC’s winning bid looks like it was made in bad faith. If it was, GUPC obtained one of the biggest construction projects in the world at the expense of what now seem like more reasonable estimates. The APC may be able to use this as leverage during negotiations.

On the other hand, even if GUPC low-balled the APC, GUPC could still come out on top. Arguably the APC should have avoided the unexpected costs by investigating GUPC’s bid and going with the value firm, Bechtel. If GUPC can establish this, it could be persuasive to a future adjudicator. Moreover, in the meantime, GUPC still has the leverage of walking off the project, leaving the APC to find another contractor on short notice.

[15] However, at least for now, the GUPC has decided to hold back on following through on its threat. See Firms Hold Off on Threat to Suspend Work on Panama Canal Expansion, Global Post (Jan. 20, 2014), http://www.globalpost.com/dispatch/news/agencia-efe/140120/firms-hold-threat-suspend-work-panama-canal-expansion.