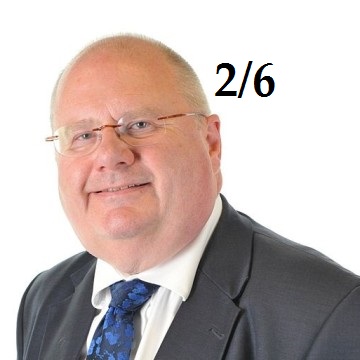 Eric Pickles has made several headlines in January of 2014 for saying that immigrants in the United Kingdom who cannot speak English “can’t participate in society.”[1] This is not the first time the British Communities Secretary has made a controversial statement on immigrants and the importance of learning English; in 2012 Pickles said immigrants face life as members of an unemployable “sub-class” living in ghettos unless they are taught to speak English “like a native.”[2] Pickles made his previous remarks in conjunction with the government’s “integration strategy,” launched in February 2012, which seeks to increase English fluency among immigrants.[3] Last year, he also pushed to increase the amount of money available for English education and to establish a “series of . . . programmes [that] target particular groups who don’t speak English.”[4]

As a part of his pro-English strategy, Pickles has also targeted the translation of government materials. In 2013, he ordered local councils to stop automatically translating their information leaflets, posters, and other materials into foreign languages, saying that while the councils have a legal duty under equalities legislation not to discriminate, that duty does not include an obligation to translate documents into a foreign language.[5] Pickles claimed that providing full and free translations of government information harms the integration of immigrants by reducing their incentive to learn English.[6] He also stopped translation inside his own department—the Department for Communities and Local Government—putting undeniable force behind his rhetoric.[7]

Recently, Pickles’s views on the importance of English have gained some serious traction. On January 18, the Daily Mail reported that Prime Minister David Cameron “intends to stop printing welfare paperwork in foreign languages and prevent claimants [from] using taxpayer-funded translators at benefits offices.”[8] Currently the U.K.’s benefits offices deal in 140 different languages, providing documents in foreign languages and translator services for those who need them.[9] Pickles and Cameron’s move to eliminate these services is controversial, as it would make it more difficult for immigrants to access the U.K.’s benefits system.

Comparing the Role of Language in the United States

As the prototypical “melting pot” of the world, the United States has a substantial number of foreign language speakers, including over 34 million Spanish speakers alone.[10] This number has increased by 210% since 1980, with the highest concentrations in Los Angeles, New York, Miami, and Chicago.[11] More generally, California, New York, Texas, and Florida are among the states with the largest immigrant populations.[12]

Like the U.K.’s current policy, many federal agencies offer materials in languages other than English.[13] Indeed, in some circumstances, federal law requires it.[14] Also similar to the U.K., many in the U.S. believe newcomers should learn English. A 2013 survey showed that 72% of Americans feel it is essential that immigrants learn to speak English.[15] And this belief is reflected in U.S. policy. The Immigration and Nationality Act (INA) provides that “[n]o person . . . shall . . . be naturalized as a citizen of the United States upon his own application who cannot demonstrate . . . an understanding of the English language.”[16] Supporters of this policy point to the importance of assimilation[17] while opponents feel demanding English proficiency is “at worst xenophobic and at best unfair.”[18]

However, there is a notable distinction between the debate led by Pickles in the U.K. and the debate in the United States. While the debate in the United States seems to focus on the English proficiency requirement for citizenship,[19] Pickles’s debate focuses on whether to compel all immigrants—not just those seeking citizenship—to learn English by stopping the printing of documents in foreign languages and the provision of taxpayer-funded translators at benefit offices. This is necessary, in Pickles’s view, to incentivize immigrants to learn English and avoid becoming members of “an unemployable ‘sub-class.’”[20]

Why hasn’t the language debate in the U.S. focused as much on incentivizing non-citizens to learn English through, for example, the measures to be proposed by Prime Minister David Cameron? It is likely because the policy behind coercing non-citizens to learn English doesn’t hold water. While an argument can be made in the U.S. or U.K. that in return for gaining the rights and benefits of citizenship, one should be expected to be a well-assimilated member of society who can speak, write, and understand English, there is a much weaker rationale for requiring English proficiency for non-citizens. By withdrawing what the U.K. has long offered its noncitizens—i.e. free translation services—Eric Pickles seeks to force-assimilate all immigrants regardless of whether they wish to be citizens. While assimilation may be a desirable result for some non-citizens, it may not be for others.

Moreover, even for those non-citizens who would benefit from assimilation, there is still a serious cost. Learning English does not come quickly, and the immediate effects of Pickles’s policy could be quite dire. Being unable to apply for welfare benefits would likely have a severe impact on the immigrants that Pickles, himself, has recognized are financially struggling. With translation services taken out of government agencies, immigrants who cannot understand English could find it nearly impossible to utilize government services.

While his intention may be good, Eric Pickles’s project would effectively lower the bar on what services the U.K. government could make accessible to its non-citizen residents. What Pickles proposes as a way of avoiding the formation of a sub-class of struggling immigrants very well could exacerbate the problem. While not directly affecting non-citizen residents’ rights to government services, taking away translation services makes access to those services nearly impossible. Thus, even if the true intent of the proposed policy is to help immigrants find success in the U.K., this roundabout method is far from achieving that goal.