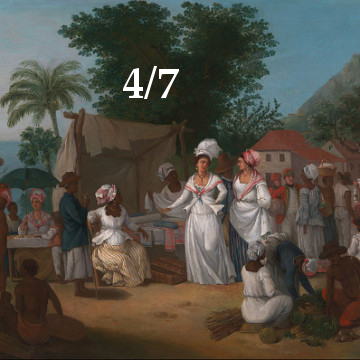 Agostino Brunias, A Linen Market with a Linen-stall and Vegetable Seller in the West Indies

The recent blockbuster and critical darling 12 Years a Slave takes pains to dwell on the cruel, gruesome reality of slavery. But film images are not the only reminder of the impact of slavery—and some nations, those whose existences were entwined with the slave trade, are seeking to leverage those lasting scars. In March 2014, the heads of fifteen Caribbean nations met to discuss the reparatory demands they will make to the United Kingdom, Spain, Portugal, and the Netherlands, countries that institutionalized and profited from many years of Caribbean slave labor.[1] This article explains the initial demand the Caribbean nations intend to make and the fallback tactic of bringing a claim before the International Court of Justice (ICJ). The paper then examines some of the potential outcomes of an ICJ ruling in favor of Caribbean nations.

The Caribbean Community and Common Market (CARICOM) was established in August 1973, after more than a decade of regional integration efforts.[2] CARICOM now has fifteen member countries, all of which met on March 10, 2014, to discuss a ten-point list of demands for reparatory justice.[3] CARICOM seeks restitution from former slave-trading powers, such as the United Kingdom, Spain, Portugal, and the Netherlands.[4] With that goal in mind, CARICOM set up the CARICOM Reparations Commission (CRC), a special group tasked with seeking reparations and handling all matters related to that goal.[5] While the ten-point plan is couched as a proposal, dependent on the goodwill and guilt of the former slave-trading nations for its effectuation, it is backed by a legal threat. The CRC plans on bringing a claim before the ICJ if these European nations do not comply with the proposal’s demands.[6]

The ten-point plan first insists that the European countries recognize their wrongs and finally issue a formal apology for the years of Caribbean enslavement, instead of continuing to sidestep the issue and give only statements of regret.[7] Second, the plan demands that the countries pay for the repatriation of the descendants of former slaves, if the descendants desire to go back to their homeland.[8] The rest of the demands call for wide-ranging development assistance for the creation of cultural institutions, such as improved public healthcare systems, literacy programs, initiatives to teach people about their cultural and ethnic history, psychological rehabilitation programs, greater access to the world’s science and technology resources, and external debt forgiveness.[9]

CRC’s main goal is to try to negotiate an agreement with the European countries.[10] However, if that approach fails then CRC plans to press their claims before the International Court of Justice.[11] Any claim will likely argue that the present under-development in Caribbean countries is a direct result of the colonial period.[12] Presenting the claim based on present-day injustices rather than historical ones allows the CRC to circumvent limits that the ICJ has on hearing historical claims; mainly conditions that countries will not be subject to the ICJ jurisdiction for wrongs before a pre-determined time.[13] To link present disparities to the sordid past, the CRC claims that the persistent socio-economic problems in the region are rooted in the colonial, slave-trading era.[14] The CRC argues that the Caribbean’s poor economic development causally flows from the harm, suffering, and long-lasting legacy of the slave trade.[15] This concrete connection means that today’s Caribbean people, descendants of slaves and inheritors of an unjust legacy that continues to eat away at the region, deserve compensation for present-day injustices that are a result of that history.[16]

As evidence, the CRC argues that the former slave-trading nations have benefitted and continue to benefit from the wealth they obtained from CARICOM-member nations.[17] This racial imbalance plays out on a domestic level too, where white families, who comprise the minority of the population in the CARICOM countries, possess most of the wealth.[18] Bolstering the causal chain, the CRC points to Britain’s 1833 Slavery Abolition Act, [19] where the British government compensated white families for their loss of property but slaves received no restitution for their years of work and suffering.[20]

The impact of European slave trade is not limited to the Caribbean, and an ICJ decision in favor of CARICOM could set a precedent for claims from other regions scarred by slavery. Europe’s demand for human chattel exceeded what Africa’s coast could provide, and so slave traders pushed further inland searching for more slaves.[21] Over the course of the 17th and 18th century, slave traders exported more than seven million slaves across the world.[22] Effectively, a decision in favor of the CRC could open up the floodgates to a torrent of litigation from any former, slave-dependent colony with struggling economies—a group that includes many South American and West African nations. The gulfs of wealth, technology, industry, and infrastructure that the CRC relies on in their potential claim exist in these regions as well, and these gaps have only widened with time.[23]

In addition to judicial and ethical barriers, the CRC proposal and lawsuit face an economic obstacle. Europe’s sluggish economy, such as Spain’s economic problems[24] and the fallout of potential Russian energy starvation policies,[25] make it highly unlikely that the European countries will want to commit to the ten-point plan proposed by the CRC, or that they would even be able to comply with any ICJ award. The judicial hurdle is high, too—it is unlikely that the ICJ would want to take on this case and risk setting a precedent of hearing historical cases.[26] All the European nations that CARICOM targets have submitted to limited ICJ jurisdiction, refusing to be bound by decisions on issues occurring before certain dates.[27] A breach of this temporal boundary would impinge on countries’ sovereignty as a result of acts committed over 200 years ago. The slave-trading days were a heinous time in world history and it is important to recognize the continuing struggles experienced by formerly enslaved countries. However, a claim against these European countries in the ICJ may not be the right solution at this point. Too many obstacles stand in the way of a forceful, judicial approach. But dialogue between European and Caribbean nations about working together to forge a solution the region’s economic woes, brought about by the CRC’s proposal, is a step in the right direction.[28]

* Oscar Lopez is a J.D. candidate at Cornell Law School, where he is the Cornell International Law Journal’s Associate on South American Affairs. He holds an M.B.A. from Texas Tech University and a B.A. in Economics and Spanish from the University of Texas at Austin.

[4] Cecily Jones, The Caribbean people have a legitimate claim for slavery reparations, The Guardian (Mar. 16, 2014, 12:32 AM), http://www.theguardian.com/commentisfree/2014/mar/16/caribbean-people-legitimate-claim-slavery-reparations.

[21] 15 Minute History: Episode 6: Effects of the Atlantic Slave Trade on the Americas, The University of Texas at Austin (Dec. 3, 2012), transcript available at http://blogs.utexas.edu/15minutehistory/2012/12/03/episode-6-effects-of-the-atlantic-slave-trade-on-the-americas/.

[27] See, e.g., Declaration recognizing as compulsory the jurisdiction of the International Court of Justice, in confirmity with Article 36, paragraph 2, of the Statute of the International Court of Justice, July 5, 2004, 2271 U.N.T.S. 285 (changing the United Kingdom’s acceptance of ICJ jurisdiction by only recognizing disputes arising after January 1, 1974); for a broader discussion of the limits of ICJ jurisdiction over the European targets, see Brooks, supra note 12.