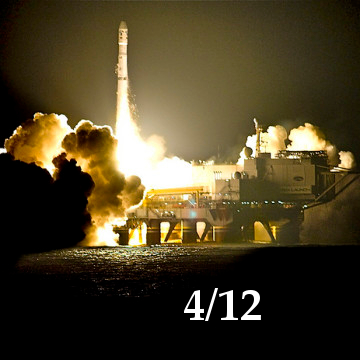 Motion to Dismiss Fails to Launch

The private spacecraft company Sea Launch began in 1995 as a joint venture between Boeing, RSC-Energia of Moscow, Aker ASA of Oslo, and SDO Yuzhnoye of Dnepropetrovsk (Ukraine) to create an affordable non-governmental satellite launch system.[1] Sea Launch launched its first satellite into orbit in 1999.[2] Since that inaugural launch, they found a niche launching broadcast satellites for customers like DirectTv and XM Satellite Radio.[3] Sea Launch’s name contains their specialty—Because of the mobility of launching rockets at sea, Sea Launch is able to project satellites into orbit from the equator, a launch site that best harnesses the Earth’s rotation and allows for more efficient launches compared to preexisting land sites.[4] However, with multiple failures in launch missions and a thin market, Sea Launch filed for Chapter 11 Bankruptcy in Delaware court in 2009.[5] After the restructuring, Russia’s Energia assumed majority ownership.[6]

As part of the bankruptcy, liability for loan guarantees fell on Boeing alone, despite the joint venture’s agreements sharing these costs. Per the terms, all partners agreed to reimburse each other for third party guarantees.[7] Since this provision has clearly broken down, Boeing has both pursued arbitration in Stockholm, Sweden per the terms of the agreement, and has filed suit in the United States District Court for the Central District of California for reimbursement from Energia and Yuzhnoye.[8]

In their suit, Boeing seeks  $222 million from Energia and $133 million from Yuznoye.[9] Although the suit is still in its pretrial stage, the court has issued findings on several motions to dismiss. First, the court denied Yuzhnoye’s motion to dismiss for lack of service and forum non conveniens and Yuznoye’s request for a stay pending a decision from the Swedish Court of Appeal.[10] The forum non conveniens claim rested on provisions of the joint-venture agreement, which listed the United Kingdom as an appropriate forum for litigation.[11] In analyzing this argument, the court stated that the joint-venture agreement allowed claims to be brought in the United Kingdom, but did not require it.[12] Furthermore, the court did not address the issue of counterclaims in the U.K. The court noted that although the mandatory language of “shall” makes it seem as if Yuzhnoye’s counterclaims must be litigated in the United Kingdom, and although Boeing has intimated that they will oppose Yuzhnoye’s counterclaims in the district court as barred by the agreement, the issue had been insufficiently briefed and so it would be incumbent on the two parties to resolve this issue.[13] The court also provided a more concrete rationale for collecting the claims and counterclaims in a single U.S. proceeding, holding that the California forum did not oppress the Ukrainian company enough to justify a foreign forum.[14] The United Kingdom was thus not the appropriate forum and the motion to dismiss was denied.[15]

In December, the court issued another opinion on Boeing’s motion to dismiss Energia’s counterclaims. Energia counterclaimed for breach of fiduciary duty and fraud and sought an accounting and the enforcement of the Swedish arbitration award.[16] The court dismissed the breach of fiduciary duty and fraud claims.[17] Similarly, they dismissed the request for an accounting because, in the court’s mind, an accounting would constitute a remedy, not a cause of action.[18]

The arbitration also found that the arbitrator lacked jurisdiction to hear claims by the affiliates of the parties directly involved in Sea Launch,[21] in particular the Boeing affiliate Boeing Commercial Space Company and an offshoot of the Norwegian Aker ASA, Old Kvaerner.[22] Although this decision foreclosing jurisdiction is technically enforceable in the United States, the court noted that the scope of the arbitrator’s ruling was narrow and limited only to jurisdiction; it thus has no preclusive effect on this current lawsuit.[23]

As Boeing has suggested, this case is just about a clear-cut contract breach by Energia and Yuznoye.[24] Beyond these preliminary motions, though, it seems that there exists no second line of defense, other than seeking to reduce costs by applying the Swedish award against any American judgment—Energia has not denied owing the money to Boeing.[25] An award for Boeing could have huge detrimental effects to Sea Launch and Energia’s future, especially when coupled with the company’s failed Intelsat 27 launch in early 2013.[26] A win for Boeing could lead to another restructuring or even renewed bankruptcy for the beleaguered space company. Moreover, since the Russian government owns 38% of Energia, its failure could send shockwaves through other Russian space projects.[27]

Despite the lawsuit and other setbacks, however, Sea Launch remains optimistic about long-term prospects.[28] Although they only have one launch currently scheduled for 2014, they intend to have at least three launches in 2015[29] — a promising outlook, provided the company can escape the legal gravity well of Boeing and the California District Court.

[4] The Purpose of the Sea Launch System, Energia, http://www.energia.ru/english/energia/sea-launch/purpose.html (2013); for a brief description of the advantage provided by an equatorial launch, see Why is it better to launch a spaceship from near the equator? Nw. Univ. Qualitative Reasoning Grp., http://www.qrg.northwestern.edu/projects/vss/docs/navigation/2-why-launch-from-equator.html (last visited Apr. 8, 2014).

[11] Yuzhnoye, 2013 U.S. Dist. LEXIS 121042 (the court directly quotes the relevant contractual provisions: “Any judicial proceeding brought against [Yuzhnoye] under this Agreement may be brought in any court of competent jurisdiction in the United Kingdom . . . .” “Any judicial proceeding by [Yuzhnoye] against BCSC shall be brought only in a court in the United Kingdom.”).