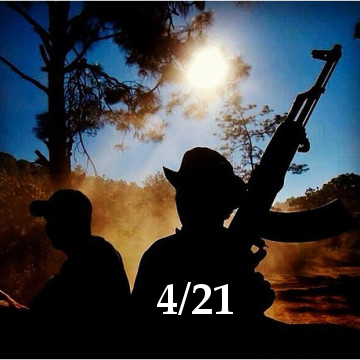 With a consumption of roughly $65 billion annually, the United States is the world’s most drugged-up nation.[1]Because about 95% of the cocaine destined for the United States travels through Mexico, along with most of the production of marijuana and methamphetamines, Mexico’s illegal drug trade profits—between $10-40 billion per year—are comparable to the GDP of many Central American countries.[2] With their massive profits, Mexican drug cartels have bought power and influence by bribing public officials and police.[3] Looking to stop the powerful cartels and the escalating violence, President Felipe Calderon declared a war on drugs soon after the 2006 election and sent the federal police and army to battle the cartels.[4] Chaos quickly ensued as fights between the government and the cartels, between rival cartels, and within individual cartels turned deadly.[5] The country became a war zone, with multiple shootings, grenade explosions, and a rapidly escalating body count.[6] To date, an estimated 90,000 people have died in this war.[7]

President Calderon left office in December 2012, and his successor, President Enrique Peña Nieto, has sought different strategies for the war on drugs. Instead of focusing on confrontations, Peña Nieto emphasized protecting civilians, who are often victims of kidnappings and extortion.[8] So far, the new strategies have resulted in an overall decline in the homicide rate, but have also significantly increased participation in extortion and kidnapping to make up for lost revenue of the drug trade.[9] In addition, President Peña Nieto also promised to institute an elite national police of 10,000 officers by the end of 2013.[10]

However, in the state of Michoacán the Knights Templar cartel’s reign of terror drove the populace to eschew the promised government aid. Instead, the citizens formed vigilante groups to fight off the Knights Templar cartel.[11] Through combined state and federal efforts to legitimize these groups in the state of Michoacán, the federal government passed the Agreement to Institutionalize Rural Defense Units (“the Agreement”), which legalizes the vigilante groups—termed Rural Defense Units (“RDU”)—and their efforts at stopping crime.[12] This article argues that the law’s current form likely creates more problems because of its vague language—language that could ultimate increase insecurity by giving too much autonomy to these vigilantes who could eventually abuse their legally granted power.[13]

Paragraph one of the Agreement requires that volunteer civilians register as members of the RDU; RDU leaders are responsible for carrying this out, and registration temporarily transforms the group into a legitimate government unit.[14] However, there is no guidance as to who should serve as group leaders, and this creates the potential hazard of self-interested leaders guiding the group towards goals other than safety.[15] The simple requirements do little to turn away the unscrupulous. The requirements: pass a health test, show a Mexican issued identification, birth certificate, proof of residence, and register your weapon.[16] There is no background check and no requirement that you have no criminal record,[17] potentially placing criminals in law enforcement positions. Additionally, the “temporary” designation offers no guidance as to how long these groups can carry guns and serve as justice keepers.[18] Another concern is whether RDUs will continue to enforce the law of the land once violence has decreased in Michoacán, usurping the traditional police.[19]

Paragraph three requires that RDU members register their guns with the Secretary of the National Defense and guarantees the agency will provide members with the necessary tools for communication, transportation, and operation.[21] There is, however, no limit on the types of guns the members can use. While Mexican law allows people to buy weapons up to a .38 caliber, members of the military or police have the legal right to buy higher caliber weapons.[22] But the Agreement is not clear as to whether RDU members are part of the police force for gun purchasing purposes. Furthermore, many Mexicans who have previously lived in the U.S. want to defend their country with the guns they brought back from the U.S., which has more permissive gun laws.[23] Other RDU members have been using the AK-47s and armored cars that they have taken from dead cartel members.[24] With lack of clarity in the registration process, it is possible that these RDU members will be less likely to register in order to reduce the likelihood of having their guns confiscated; and if registration would confiscate these powerful weapons, then the heavily armed vigilantes will likely ignore the law. Either result leads to state-sanctioned militia with few limits on authority or mission scope and more powerful guns than the local police.[25]

Allowing groups to patrol the rural areas in Michoacán has already proved problematic. In March 2013, an RDU seized 12 police officers and blamed them for killing their leader in the town of Tierra Colorada.[26] In another instance, an RDU opened fire on a group of tourists headed for Acapulco when the car did not stop at the roadblocks it had improvised.[27] Another such group, in the neighboring state of Guerrero, arrested 54 individuals and tried them unofficially, without a legitimate judiciary or defense counsel.[28] The most problematic effect, though, has been the extension of quasi-legal status to cartel agents. Police have discovered that RDUs sometimes work to advance the illegitimate interests of organized crime, especially by helping attack, arrest, and kill rival cartel members.[29]

RDUs empower well-intentioned citizens who seek to protect their families and communities from the violence in Mexico.[30] But it is easy for these groups to turn into the very criminals that they are meant to be fighting.[31] Mexico should be mindful of the history of Peru, Guatemala, and Colombia; countries that have pursued similar strategies with regrettable results.[32] Colombia’s vigilante forces provided the backbone of what would eventually become the Fuerzas Armadas Revolucionarias de Colombia, which is now actively involved in global drug trafficking and has committed numerous human rights violations.[33] In light of the Agreement’s holes, Mexico should amend it to increase governmental control over the RDUs.

First, the Agreement should require background investigations of RDU members to ensure that the people carrying guns and serving as protectors of their communities do not pose a threat to those they protect. Second, Mexico should require that suspects detained by RDUs be delivered to the proper authorities. Third, the law should put in place continuous communication between RDUs and local police. Beyond communication, RDU registration should entail training in investigative techniques, and effective communication with both the community and potential suspects. Finally, Mexico should provide employment opportunities for those RDU members interested in joining the police, and also should seek to provide other members with jobs as rewards for their service to the community. Providing a personal, financial reward for successful RDU service would encourage RDUs to work towards creating a stable, peaceful community, instead of prolonging the violence and chaos because their livelihoods and identities depend on it. But as the Agreement currently stands, there is a huge potential for these groups to “exacerbate the violence, undermine the rule of law, violate citizens’ rights, and spread crime.”[34]

* Oscar Lopez is a J.D. candidate at Cornell Law School, where he is the Cornell International Law Journal’s Associate on South American Affairs. He holds an M.B.A. from Texas Tech University and a B.A. in Economics and Spanish from the University of Texas at Austin.