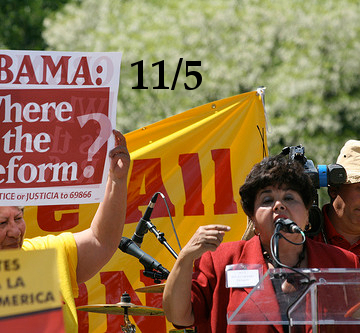 Executive Efforts to Solve the Immigration Crisis through Treaty Enforcement

On June 30, 2014, President Barack Obama vowed to the American people that he would take executive action by the end of the summer to begin repairing America’s broken immigration system.[1] The executive order was speculated to include tougher border security, and temporary relief from deportation and work authorization for millions of undocumented immigrants.[2] This announcement occurred in the wake of an unprecedented number of children—some accompanied by adults, some alone—arriving at the United States’ southwestern border.[3] Close to three quarters of the undocumented immigrants arrived to the United States from Honduras, Guatemala, and El Salvador.[4] This surge of undocumented children revived the conversation regarding the country’s broken immigration system.[5]

As the country faced both a humanitarian and immigration crisis, President Obama promised to take as much action as legally allowed to improve the country’s immigration system.[6] He further urged House Republicans to act on the comprehensive reform bill passed by the Senate on June 27, 2013.[7] Public opinion initially favored swift action, with the majority of American’s agreeing that dealing with the immigration issue should be a top priority.[8] As the public waited for executive action, the President directed the Departments of Homeland Security, Health and Human Services, Defense, State, and Justice to aggressively respond to the immigration surge.[9] These actions alleviated the crisis at the border and the number of undocumented, unaccompanied children, and adults with children began to decline towards the end of the summer.[10]

Perhaps, the lower number of undocumented immigrants attempting to cross border gave the President some sliver of justification when he broke his promise to the American people. On September 6, President Obama announced that he would delay his executive action on immigration until the end of the year, thus trampling the vow to deliver the action by the end of the summer.[11] He explained that his decision to wait emerged out of his concern that an executive action at this moment would not be “sustainable.”[12] The President did not further explain what changed between the day he made his promise and the day he announced the delay.[13] Without a clear explanation, the public speculates that his change in plans is politically driven.[14] Political analysts and reporters claim that the real reason behind the delay is the President’s effort to save the Democratic Senate in the upcoming midterm elections.[15]

Regardless of the reason behind the delay, the country continues to face an influx of thousands of undocumented immigrants each month.[16] This influx can be mostly attributed to the instability, violence, and poverty these immigrants face in their home countries.[17] Between 40 and 60 percent of the arriving migrants have a humanitarian claim for why they fled their home country.[18] Given these factors, an executive action or bill aiming to comprehensively address the immigration issue would have to include provisions addressing the dire living standards in Guatemala, Honduras, and El Salvador. President Obama and his administration are aware of the importance of dealing with these underlying sources, but due to political gridlock in Congress, they have been unable to obtain funding to fully address the issues in Central America.[19] Without any help from Congress and his unwillingness to execute and administrative order, President Obama appears to be looking for other less controversial means to combat the influx of undocumented immigrants from Central America.[20]

On September 18, 2014, some two weeks after the President delayed his executive order, the United States Trade Representative, Michael Froman, announced that United States would be proceeding with a labor enforcement case against Guatemala under the Dominican Republic-Central America Free Trade Agreement (CAFTA-DR).[21] CAFTA-DR is a free trade agreement between the United States and Costa Rica, El Salvador, Guatemala, Honduras, Nicaragua, and the Dominican Republic.[22] The agreement is meant to “strip away barriers to trade, eliminate tariffs, open markets, and promote investment” in the member countries and requires all members to enforce fair and humane labor standards.[23]

The initiation of a labor dispute under a free trade agreement is unprecedented, but it is also the natural outgrowth of the failure of other diplomatic measures.[24] In July 2014, President Obama met with the Guatemalan President, Perez Molina, and expressed his concerns regarding the country’s rampant poverty—[25] poverty brought about in large part by the country’s failure to enforce its labor laws.[26] Discussing the enforcement action’s rationale, Froman explained, “We have a collective interest in encouraging Guatemala to create an economic environment that offers that opportunity, that reassures families that their children have a future at home and that they can make a living by staying rather than risk their lives by leaving.”[27] In April of 2013, Froman and the Guatemalan government prepared an 18-point Enforcement Plan to strengthen labor law enforcement.[28] Yet almost a year and a half later, Guatemala has not been able to fully implement the plan.[29]

This pending enforcement action grew out of an April 2008 complaint filed with the Department of Labor.[30] In this submission, the AFL-CIO and six Guatemalan worker organizations claimed that Guatemala had violated its obligation under the CAFTA-DR to effectively enforce its labor laws.[31] After reviewing the submission, the Department of Labor issued a 2009 report noting significant failings in Guatemala’s labor law enforcement and making specific recommendations for improvement.[32] This report and subsequent efforts—including the threat of arbitration and the 18-Point Enforcement Plan failed to bear fruit,[33] and Guatemala has since been labelled by the International Trade Union Confederation as “the most dangerous country in the world for trade unionists.”[34]

However, Guatemala is not the only Central American nation with allegedly lax labor protection—just the most egregious violator in CAFTA-DR. In March of 2012, the AFL-CIO, along with twenty-six Honduran labor organizations, submitted complaints to the Department of Labor.[35] The submission alleges that actions taken by the government of Honduras, or lack thereof, have effectively denied workers their rights under Honduran law in a range of critical workers rights realms: freedom of association, the rights to organize and to bargain collectively, and child labor prohibitions.[36] The resulting harm to union-organizing efforts parallels Guatemala’s, and again violates CAFTA-DR’s labor provisions. Given the relatively recent submission of these allegations, though, a similar enforcement action is not likely in the near future. The Department of Labor’s bureaucratic machinery turns slowly, and the Office of Trade and Labor has, since November of 2012, been reviewing the submission’s allegations in preparation for a subsequent report.[37]

President Obama has failed to work with Congress to pass the comprehensive reform bill, and has not issued an executive action to combat the ills of the United States’ broken immigration system. Legislative opposition and electoral politics stand in the President’s path. But within the political constraints he has found a path, through treaties protecting workers’ rights, to attack the multifaceted immigration issue. The labor dispute under CAFTA-DR is an attempt to combat the poverty and dearth of economic opportunity in Guatemala, which is a major cause of the surge of unaccompanied children and adults with children attempting to enter the United States. Although the initiation of a labor enforcement case under CAFTA-DR could possibly involve Congressional and electoral politics, so far it has been welcomed as a positive effort to attempt to curtail immigration and improved the living standards in Guatemala.[38] Furthermore, CAFTA-DR already gives the power to the United States Trade Representative to begin this action without any further approval from the United States Congress.[39] President Obama and his administration have found in CAFTA-DR a way to pierce politics and maintain their commitment to fixing the United States’ broken immigration system.

* Aida V. Nieto is a J.D. candidate at Cornell Law School, where she is the Cornell International Law Journal’s Associate on Latin American Affairs and a research associate for the Legal Information Institute. She holds a B.A. in Government and a minor in Immigration Studies from the University of Texas at Austin.

[9] Jeh Johnson, Sec’y, Dep’t of Homeland Sec.,, Statement by Secretary Johnson About the Situation Along the Southwest Border

[23] Statement of Why the Dominican Republic-Central America-United States Free Trade Agreement is in the Interest of U.S. Commerce, Office of the U.S. Trade Representative, http://www.ustr.gov/webfm_send/2635.