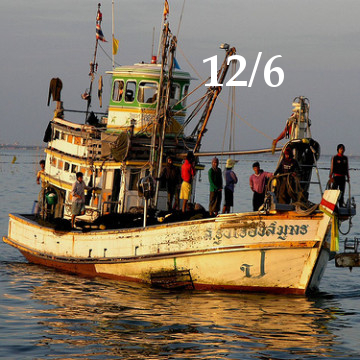 Human Trafficking and the Fishing Industry in Thailand

Two years ago, a smuggler promised to take Myint Thein across the border into Thailand, where he would find work in a factory.[1] After arriving, Thein realized that he had been sold into slavery aboard a ship in Katang, a port on Thailand’s western coast.[2] “They wouldn’t let me go,” he said, “. . . when I tried to escape, they beat me and smashed all my teeth.”[3]

This is the story of many migrant workers in Thailand’s fishing industry, where human trafficking—forced labor and exploitation through means such as fraud, abduction, abuse of power, or deception[4]—is rampant.[5] Although the phrase “human trafficking” is most often associated with sex trafficking, the fishing and agriculture industries also are plagued by the use of forced labor.[6] The lack of transparency in seafood suppliers, hiding their actions from the public eye, allows labor trafficking to go undetected.[7] The fact that these human rights abuses happen on the open ocean, where there is no government or NGO oversight, also makes catching traffickers difficult.[8] Furthermore, victims of human trafficking are often undocumented migrants from other countries who would risk deportation if they attempted to notify police.[9] This fear prevents them from trying to seek help from the government.[10]

The use of human slaves in Thailand’s fishing industry is “systematic,” according to the deputy Directors of Human Rights Watch’s Asia division, Phil Robertson.[11] The owners of Thai fishing vessels place their “orders” for trafficked laborers with brokers, stating the number that they need and the price that they will pay for them.[12] To fulfill these orders, brokers bring trafficked laborers into Thailand from countries such as Burma, the number one country of origin for trafficking victims in Thailand, Laos, and Cambodia .[13] In these countries, fake labor recruiting agencies ensnare potential victims with the promise of work and then sell their “recruits” into slavery on Thai fishing vessels.[14] Inhumane working conditions and daily abuse become part of these victims’ lives.[15] Years may pass before they see land. Often, a plate of rice is their only daily meal[16] and they are forced to drink “amphetamine cocktails” to stay awake for days in a row.[17] It is not unheard of for these workers to be murdered by their captors if they become too sick to work.[18] In an attempt to escape, some jump to their death in the ocean.[19]

The number of trafficking victims in Thailand’s fishing industry has not been officially recorded, but the government of Thailand “estimates that up to 300,000 people work within its fishing industry, 90% of whom are migrants.”[20] Lured by the nation’s relative prosperity and often lacking Thai language skills, these migrants are one of the most at-risk groups for human trafficking in Thailand.[21]

This essay first examines the weaknesses in Thailand’s own internal efforts to prevent and combat the slavery that its fishing industry seems so dependent on. It then turns to the United States’ half-hearted response based on the Trafficking Victims Protection Act (TVPA).[22] The State Department , acting under TVPA auspices, has taken steps to shed light on Thailand’s rampant human trafficking problem through the annual Trafficking in Persons (TIP) report. However, the United States has not enforced sanctions against Thailand that are authorized when a country receives the lowest ranking available in this report. Although the U.S. is hesitant to upset its international relations with Thailand by sanctioning the country, using other diplomatic tactics could strengthen the TIP Report’s effectiveness by encouraging countries to combat human rights abuses. Without taking steps beyond labeling and drawing attention to the human trafficking problem in Thailand, it is unclear whether the United States’ response to human trafficking in Thailand will bring about a lasting change in the country’s reliance on slavery.

Although Thailand has laws against human trafficking, they go unenforced for several reasons. The Ministry of Labor, which inspects workplaces in Thailand for instances of human trafficking, does not have enough inspectors to fully investigate potential cases—even after these cases have been identified and reported to the local police.[23]While it is common knowledge that the Thai fishing industry is plagued with human trafficking, the Royal Thai Marine Police have not made serious efforts to search for trafficked laborers.[24] They claimed to find zero forced labor cases in pre-departure searches in 2011.[25] Compounding the failure to detect cases of human trafficking, many victims are unable to reach out to government officials for help. Although the government has established trafficking hotlines to encourage victims to self-identify, these hotlines are useless for migrant victims who do not speak Thai or English. [26]

Corrupt government officials also contribute to the prevalence of human trafficking in Thailand. There have been reports that Thai military and civilian officials played a part in smuggling Burmese asylum-seekers into Thailand, where these asylum-seekers were then sold into slavery on Thai fishing boats.[31]There are also reports that Thai police officials sold men being held in Thai detention facilities into slavery through smugglers and brokers.[32] These victims were allegedly sent to labor in shipping companies, restaurants, farms, and camps.[33]

Slave labor is so prevalent in Thailand that in 2014, the U.S. Department of State gave Thailand the lowest ranking available, Tier 3, in the 2014 Trafficking in Persons (TIP) Report.[34] This annual report includes information about the amount of human trafficking happening in a particular country, the efforts its government is taking to combat human trafficking, and recommendations by the United States about how the country can combat human trafficking.[35]  A Tier 3 rank classifies Thailand’s government as one that fails to “fully comply with the minimum standards [of the Trafficking Victims Protection Act] and [is] not making significant efforts to do so.”[36]

There are two main methods through which the TIP Report may affect policy in other countries.[37] The first is economic and the second is reputational.[38] The U.S. reserves the power to sanction countries that rank Tier 3 on the TIP Report, which could result in “restrictions on US foreign assistance and access to global financial institutions such as the World Bank.”[39] Countries may also be motivated to increase their scores on the TIP Report in order to avoid reputational damage in the eyes of the international community and the United States in particular.[40]

While the U.S. has the power to sanction countries that rank Tier 3 on the TIP Report, it waived sanctions against Thailand.[41] Economic motivations were most likely a major factor in this decision, given that Thailand is one of the main suppliers of seafood to the U.S.[42] The shellfish caught on these ships are often sold to multinational companies like CP Foods and then sold to retailers such as Costco or Walmart.[43]

Waiving sanctions against Thailand without utilizing other meaningful diplomatic tactics could make the possible economic repercussions of ranking Tier 3 in the TIP Report appear to be an empty threat.[44] The reputational damage of ranking Tier 3 is most likely not enough to spur Thailand to improve their efforts to enforce human trafficking laws, given that fishing is the economic lifeblood of Thailand.[45] It remains to be seen how the decision not to enforce sanctions will impact the Thai government’s efforts, or lack thereof, to combat human trafficking.

* Ellen Taylor is a J.D. candidate at Cornell Law School, where she is the Cornell International Law Journal’s Associate on Asian Affairs. She holds a B.A. in Philosophy from the University of California, Los Angeles.

[1] Kate Hodal and Chris Kelly, Trafficked Into slavery on Thai Trawlers to Catch Food for Prawns, The Guardian, (June 10, 2014), http://www.theguardian.com/global-development/2014/jun/10/-sp-migrant-workers-new-life-enslaved-thai-fishing.

[15] Charlie Campbell, Child Slaves May Have Caught the Fish in your Freezer,Time (Mar. 5 2014),http://time.com/12628/human-trafficking-rife-in-thai-fishing-industry/.

[35] Annie Kelly, How NGOs are using the Trafficking in Persons report, The Guardian (June 21 2013), http://www.theguardian.com/global-development-professionals-network/2013/jun/21/ngos-using-trafficking-persons-report.

[44]In 2010, the United States only sanctioned two of the thirteen countries that ranked Tier 3- Eritrea and North Korea, Guentert, supra note 23, at 965.

[45] Kate Bollinger and Kim McQuay, Human Trafficking Rampant in Thailand’s Deep-Sea Fishing Industry, In Asia (Feb. 8, 2012), http://asiafoundation.org/in-asia/2012/02/08/human-trafficking-rampant-in-thailands-deep-sea-fishing-industry/ (noting that despite years as a Tier 2 country, and mounting international pressure, Thailand had failed to meaningfully correct the human trafficking prevalent in its fishing industry)